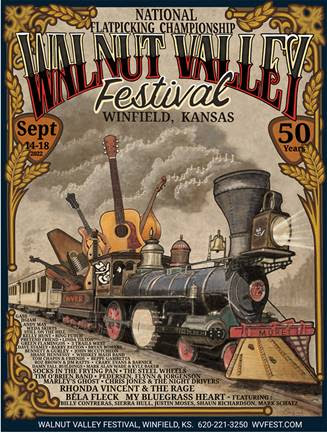 This fall Winfield, a small south-central Kansas town, will welcome fans to its 50th Walnut Valley Festival. From its humble beginnings in 1972, with eight bands or solo performers, the event has grown into an annual gathering of acoustic music fans and musicians from around the world, with four stages showcasing world-class performers over five days. To celebrate its golden anniversary, a stellar combination of folk and bluegrass music’s top artists is slated to appear at Winfield from September 14-18.

Several of this year’s performers have a connection to the 1972 lineup, but only one, Dan Crary, is listed on the poster for both the 1st and 50th festival. The flatpick guitar legend and Kansas native will perform with Bill Evans and Wally Barnick.

Other artists with ties to early Walnut Valley Festivals include two former members of 2020 IBMA Hall of Fame inductee New Grass Revival–Béla Fleck and Pat Flynn (although both joined the group after its 1972 appearance at Winfield). Fleck, 2022 Grammy winner for Best Bluegrass Album with “Béla Fleck My Bluegrass Heart,” will bring the album to life at Winfield, assisted by a multi-generational band of top bluegrass players that includes Billy Contreras, Sierra Hull, Justin Moses, Shaun Richardson and Mark Schatz. This will be Fleck’s first return to Walnut Valley since New Grass Revival’s last appearance in 1989. Flynn also returns, with Herb Pedersen and John Jorgenson.

Rhonda Vincent & The Rage will be at Winfield for the first time. Vincent was once crowned by the Wall Street Journal as the New Queen of Bluegrass, and her band enjoys the unique status of being the most awarded band in bluegrass history, having won a Grammy for Best Bluegrass Album in 2017, as well as 19 IBMA awards and 89 SPBGMA awards.

Other artists featured at this year’s festival include Bryan Bowers, Chris Jones & The Night Drivers, Tim O’Brien Band, The Steel Wheels, Marley’s Ghost, John McCutcheon, Tom Chapin & Friends and Still on the Hill. Andy May returns to host his Acoustic Kids Showcase, giving young musicians an opportunity to appear on stage and gain experience in front of a live, supportive audience.
If you enjoy watching talented guitar players, then this will be a year to remember, as the lineup includes Stephen Bennett with Bill Gurley, Italian virtuoso Beppe Gambetta, and talented young Irish guitarist Shane Hennessy.

Irish bands Socks in the Frying Pan and JigJam, known for their humor, energy level on stage and expert musicianship, are back as well. Past National Hammer Dulcimer Champion Mark Alan Wade will be joined by Kyle Baker. Already a Winfield favorite, Bing Futch is able to bring a whole new sound to the mountain dulcimer (and other instruments). Brooklyn’s Damn Tall Buildings will mark their second year at Winfield, after making a big splash in 2021.

Wichita-area groups Green Flamingos and Pretend Friend, along with 2022 Walnut Valley Battle of the Bands winner Whiskey Mash Band, from Kansas City, reflect the depth of musical talent in our region. Kansas City songwriter Kelly Hunt will make her Winfield debut, and campground favorites the Weda Skirts, from Eastern Kansas, will keep your toes a tappin’. Recent International Bones Champion and Winfield native Barry Patton will be joining friends on stage, creating those special moments treasured by fans.

Dave Stamey and 3 TRAILS WEST are among the best Western-style musicians. Festival veterans Roz Brown and Jim Ratts always fit in with their humor, stories and original music. Linda Tilton will be back on stage with her dance-like signing of song lyrics for audience members with hearing loss. Local band GASS will be playing gospel music on stage as things wrap up on Sunday.

Media Director Rex Flottman: “We had a difficult task this year, as we wanted to invite EVERYONE–all of the entertainers who have helped propel Walnut Valley Festival to this point, our 50th year. Of course, no festival has that big of a budget, or enough time in the schedule! We have a great lineup, including many of the best-loved Winfield performers as well as some new-to-Winfield artists that we know our crowd will enjoy.”

Along with the performer list, Walnut Valley Association is excited to release the 50th edition of this year’s Walnut Valley Festival promotional poster. Poster designer Peter Thomas Lague is a Lawrence, KS, based freelance artist, musician, and independent contractor. He has been painting murals, designing, teaching, and spreading creativity from Kansas to Los Angeles for the past 30 years. To contact Peter about his work, please call 785-424-4422, or email plague1968@gmail.com

The Walnut Valley Festival runs from September 14 through 18, 2022 and is held at the Winfield (Kansas) Fairgrounds. Tickets are on sale now and may be purchased at www.wvfest.com

There are no articles to display.